How does a Radon Mitigation System Work:

The majority of radon mitigation systems installed are a type referred to as a sub-slab-depressurization-system.  Sounds complicated – but it’s not.  The system basically consists of a fan unit that runs 24 hours a day and creates a pull, or depressurization, to extract radon out of the soil before it has a chance to get into the home.  The sub-slab part of the system means it is installed to pull radon gas from below the home – whether that’s a basement slab, crawlspace floor, or slab-on-grade construction.  And yes, contrary to that old urban-myth, radon can be present in a home whether you have a basement or not – any home construction can have radon present.

The gas comes up out of the soil and doesn’t care if you have a basement or crawlspace or slab – if the radon is elevated in the soil below your home, you’ll have radon in your home.  The typical radon mitigation system is made up of the following components: a fan unit that creates the depressurization; electrical power supplied to the fan; and piping which runs from the fan down to the lowest level of the home and more piping to extend from the fan up to the highest point on the outside of the home to push the radon gas out into the air.  There is also typically a manometer device which gives you a visual indication that the system is operating properly.

Did you know roughly 20% of the radon tests we perform on houses with radon systems come back with higher than safe levels? The EPA recommends you get a radon test done regularly. Take advantage of our limited time $100 48 hour radon test for Colorado residents. Click here to schedule yours today.

If a radon mitigation system is installed in your home, for the most part the system should take care of itself and require little maintenance or action.  There are a few checks you can do to verify that the system is operating and is venting radon gas from the home properly.  The following components of a system should be checked and visually verified:

The radon fan is the heart of the system.  The fan runs 24/7 and is constantly extracting radon gas from the soil. Per EPA installation protocol the fan unit is supposed to be mounted either outside the home, in a garage or in an attic.  The unit should not be inside the home.  If it is inside, you should consider having it relocated outside.  The first thing you can do once you have located the fan is just making sure it is actually running.  You can place your hand on the fan and you should feel it vibrating.  Most fans run fairly quiet, so if you feel vibration it’s likely working.  If the fan is excessively noisy, you may want to have it replaced.  Radon fans typically have an average 10 year lifespan, and if the bearings are starting to go the fan will get noisy.  If the fan is running, that’s a good first step in satisfying your radon mitigation system maintenance checklist.

If the fan is not running then there may be an electrical issue with no power supplied to the fan, or the fan may be defective.  Often an installer will add a switch inline with the fan, to allow for servicing the fan or system as an easy means of turning off the fan.  Or the fan cord may plug directly into an electrical outlet.  Lastly, the fan may be run to a dedicated breaker in the electric panel.  It may require an electrician’s help to determine whether proper power is applied to the fan, or to determine whether the fan itself is defective.

Assuming the fan is operating, the next item in a radon mitigation system maintenance plan is to check the built-in manometer.  This device is a liquid-filled glass tube, usually with red or blue oil liquid in it, and a number scale with a small air tube going from the manometer into the radon pipe.  The manometer is usually mounted on the radon pipe near the point where it penetrates into the basement slab or in the crawlspace above the vapor barrier or below the fan unit somewhere.  The purpose of this device is to visually display whether the pipe is being depressurized by the fan.

The reading of this manometer should be above zero, indicating the fan is working and depressurizing the pipe as it comes out of the ground.  There is not a set level for these readings – it will vary by the system installed and the size of the fan, length of piping, etc.  As long as some reading is present, then the fan is depressurizing the system.  The oil-based liquid can dry up in these manometers over time, so if the liquid is missing or dried out, you can replace the liquid.  The complete manometer kits are also available for purchase if broken. Assuming the fan is operating and the manometer appears to indicate the system is depressurizing, the next step in your radon mitigation system maintenance plan is to verify that the piping throughout the system is intact and not damaged.  The interior piping, typically white PVC, should run to the lowest level in a home, and penetrate below the slab or below the vapor barrier in a crawlspace.  Verify that the piping is not damaged or separated at the seams.  If the piping penetrates a concrete slab, the edge should be caulked and sealed around the edge of the pipe and concrete.  If separated or cracking, re-caulk as needed. 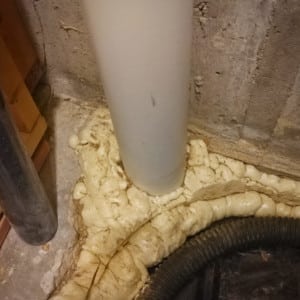 Next steps in your radon mitigation system maintenance plan is to check the outside piping.  Per EPA protocol, the exterior piping where radon is vented from the system should exit at the top of the home, above the eave.  We typically see piping extend up the side of the home and route outward around the soffit and gutter, venting above the roof edge.  Occasionally we see a system that doesn’t extend all the way up the wall, but as long as it doesn’t vent near an operable window, that is acceptable.  You don’t want radon being vented from the lower level, then just blowing back into the home through an open window.  Make sure this piping is in good condition and the exit point is not blocked in any way.

Those are the key items to verify for your radon mitigation system maintenance.  All of these steps can tell you if it appears the system is operational and in good condition.  But nothing can tell you if the radon levels in the home are being kept low aside from a radon test.

The only way to know for certain that your radon mitigation system is operating properly is to have a radon test done.  And the EPA recommends that testing be done every 2 years to verify radon levels in the home, and to ensure that your mitigation system is operating properly.  At Scott Home Inspection we perform 48 hour short term radon testing in Colorado per the EPA guidelines.  For more information visit our radon testing page.  For additional general radon information visit the EPA Radon website.  For help with Radon Mitigation System Installation or Repair, visit our friends at Absolute Radon Safety.

About the Author: George Scott

George founded Scott Home Inspection in 2006, and has grown the business into a multi-inspector firm serving the Colorado Front Range, from Fort Collins down to Colorado Springs. As an ASHI Certified Home Inspector and Certified Energy Rater, George is an excellent resource to help with inspection and energy-related requirements.